HID Upgrade to the Halogen Setup in the Passat B8

A must upgrade if you want better light and improved looks. It's dead easy to do as well. Its been several days of night driving with early evenings and happy to report no drivers are flashing me and have no lights out errors. 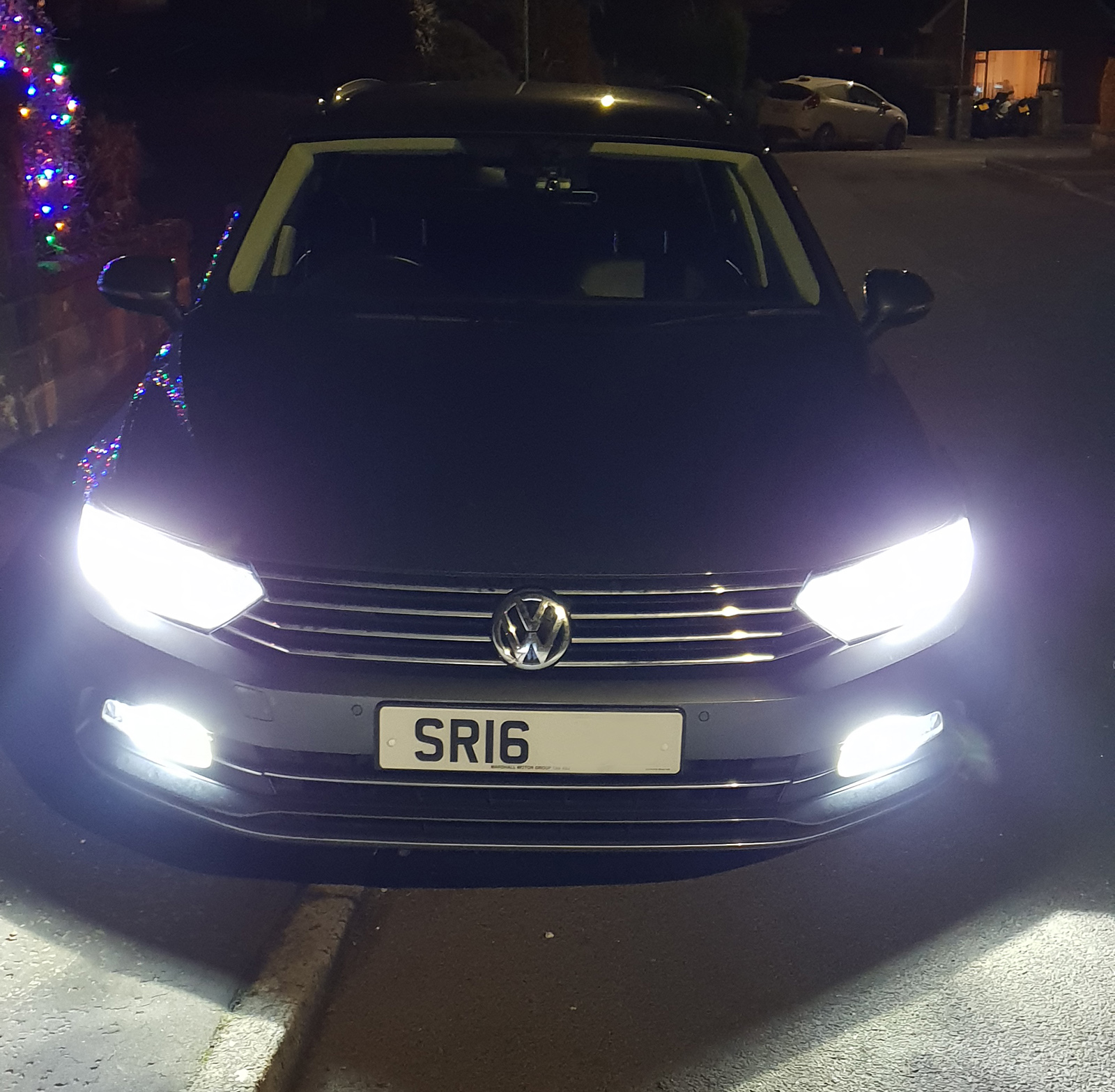 Be sure to read my other post on upgrading my DRL's and fog lights to LED's. This will save me a lot of finger work tonight .... sorry missus, straight in tonight!

So assuming you have read that post, I will continue.

The headlights on the halogen setup of the Passat B8 is a reflector housing. This makes the use of any other kind of bulb difficult as the effectiveness of the reflector housing is reliant on the exact positioning of the filament within the halogen bulb to accurately project the light within the permitted zones, factoring in not blinding other drivers (cut off). See the Youtube video mentioned in other post. Previous LED bulbs will not work well in reflector housings as the light emitted is thrown everywhere, reflected all over the place giving an inaccurate beam pattern and diluting what light does go in the direction needed.

So other than an expensive attempt at retro fitting the original VW LED headlights - pricey and a ball ache to procure the whole setup, not just the housings but finding someone who would be willing to code the car, we have 2 options:

Now HID kits are intended for projectors. However on my research I kept seeing a new H7 HID labelled H7R - intended for a reflector housing. But little information of it - for complaints or praises. The bulb is not entirely clear as other HID's - having a part of the bulb painted / coated.

The other option is LED. The latest offering of LED chips is from Philips, superseding CREE. These are such an improvement over previous LED bulbs, that OSRAM as well as the manufacturer - Philips are making LED H7 bulbs ... for over £140! This latest kind, have 3 or 4 super bright LED's (twice as much if dual function - H4), rely on a far more effective copper plate for heat dissipation and therefore does not have a lengthy heat sink and fan - which inevitably fail after you finally learn to put up with the whine of the cooling fan. I have not owned a set with a fan but this tends to be the main complaint.

Unbiased reviews say this latest offering is comparable to a 35watt HID kit with almost as good a beam spread / hot spot. Hence why i opted for them for my fogs in my other post. So with this in mind I decided to get a 55watt HID kit for my dipped beam and see if the H7R was all it is cracked up to be.

The one I ordered off ebay was £52 and labelled as "55w HID Terminator conversion kit Canbus No error FREE H1 H7 H7R Audi VW Bmw" by someone called We-Sell-HIDS. Also on Amazon.

So time to install

Tools needed: Drill and 22mm flat bit (measure your grommet in the kit as it may differ to mine), wide flat head screwdriver, side cutter for zip ties

The kit in its pretty box 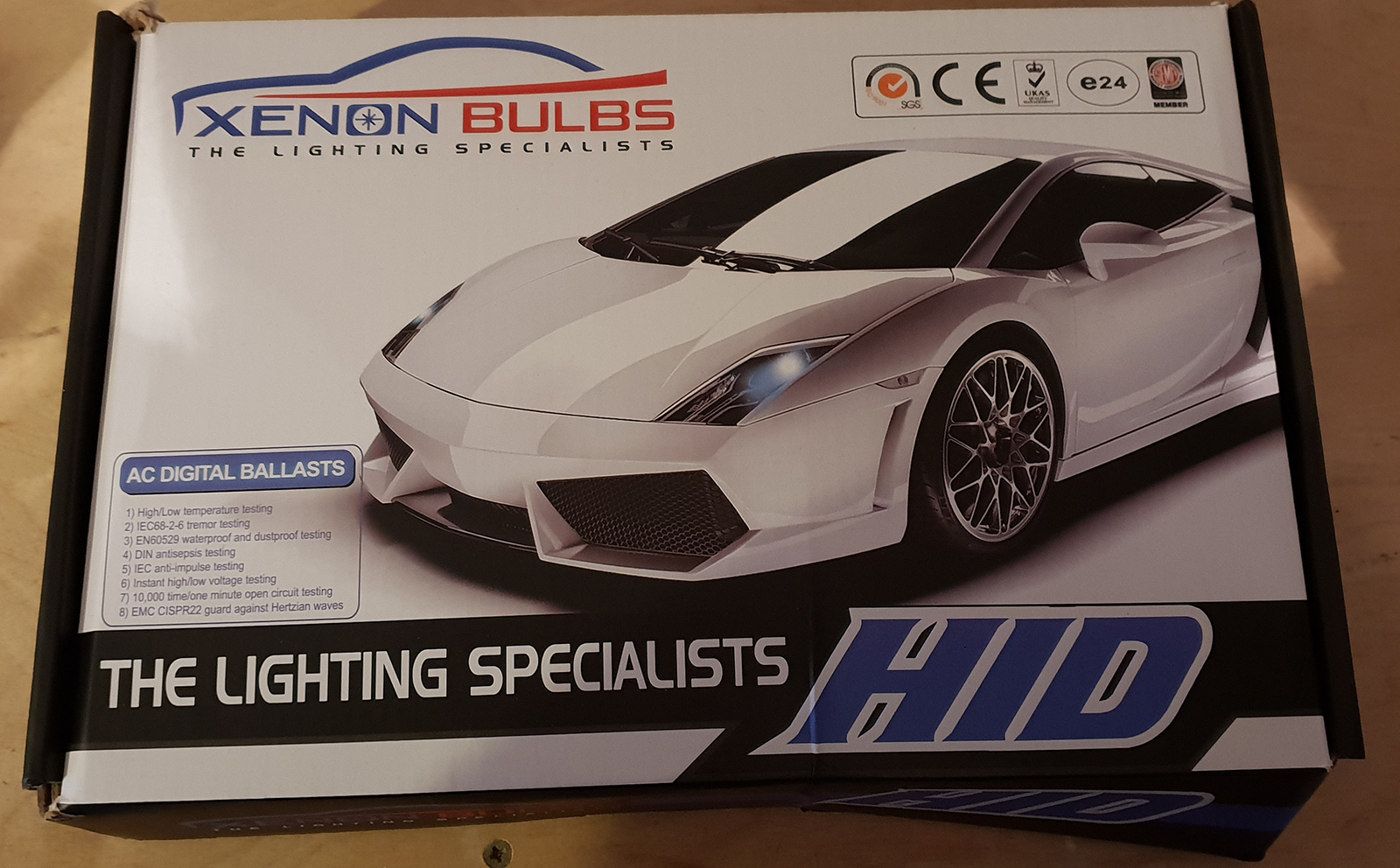 And inside - the bulbs, ballasts, cable ties and sticky pads

The bulb - observe its coating 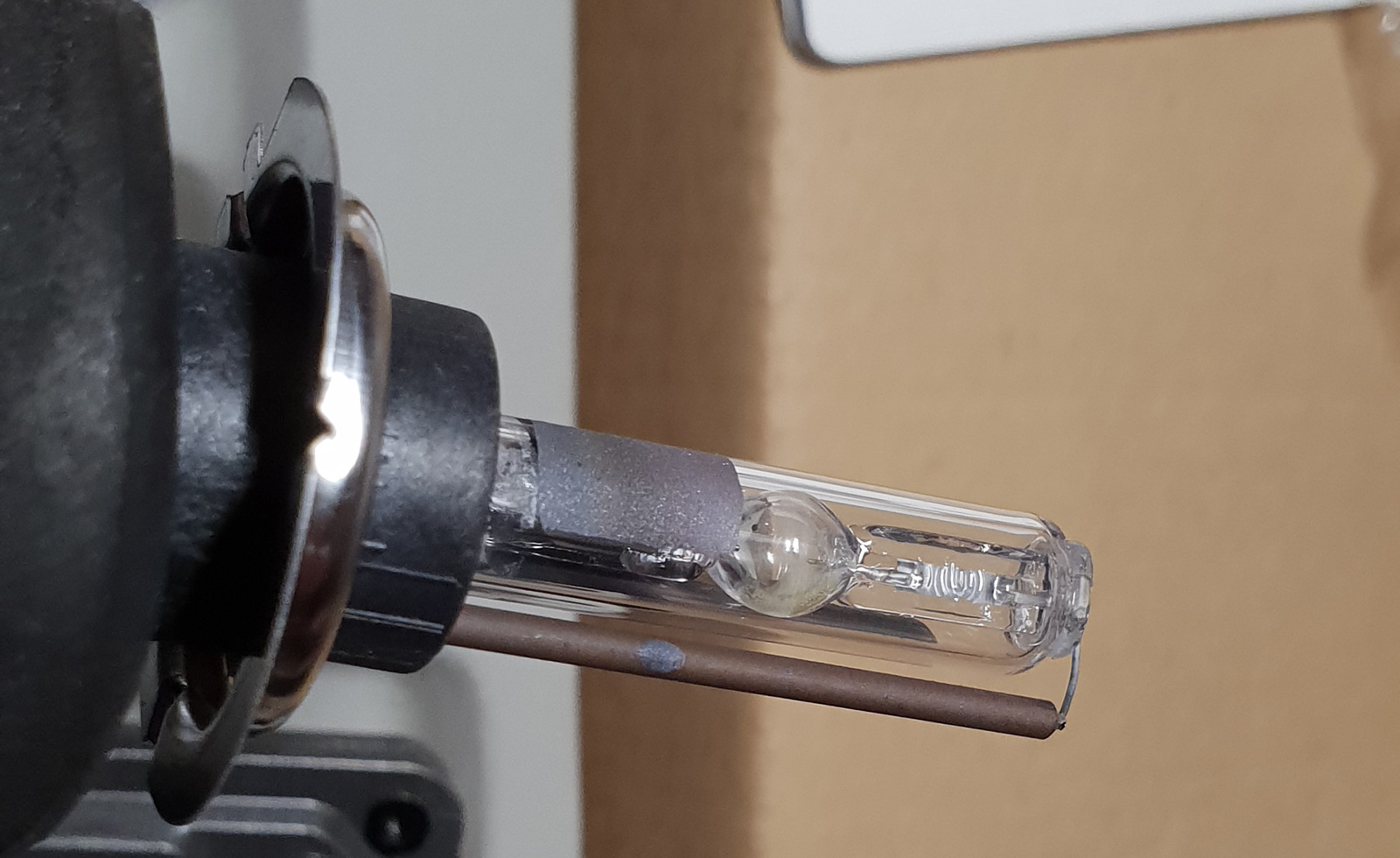 To access the dipped bulb you have to go in from the rear ....... of the wheel arch. Steer to gain access. Now pry the bottom out whilst pulling down to slide down the trap door 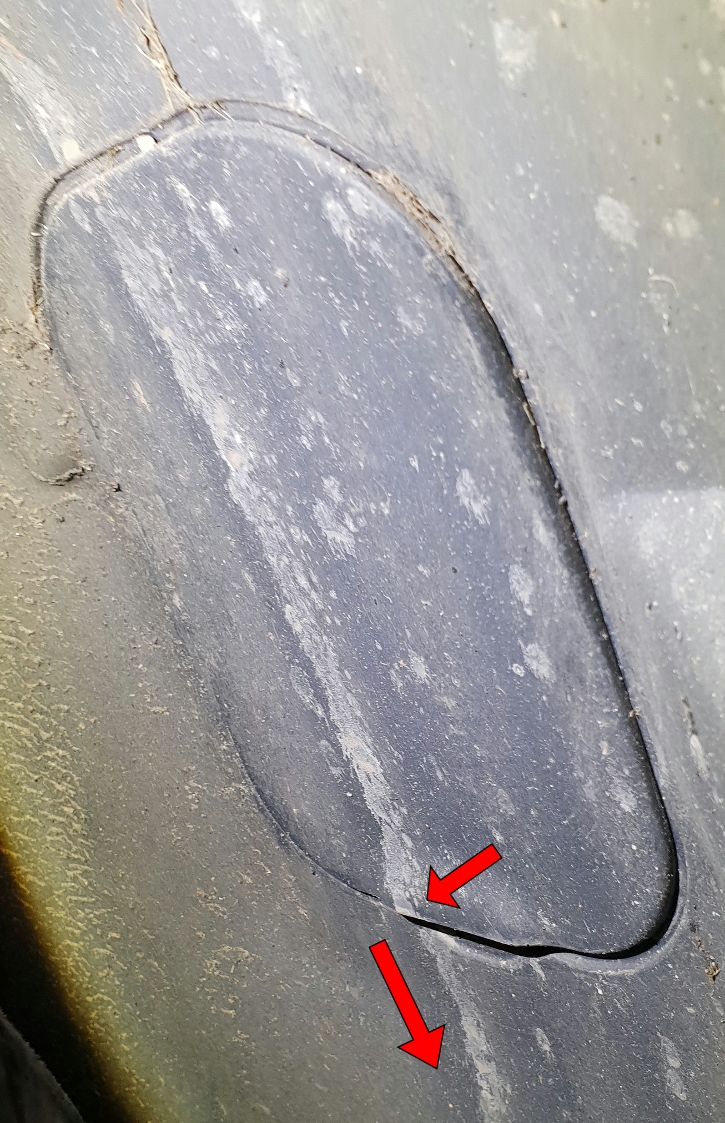 Now you need to belly it so to speak, push your finger up (blue arrow) or use a wide flat blade screwdriver, and pull towards yourself (red arrow) to belly the piece so you can pull one side out (green arrows) 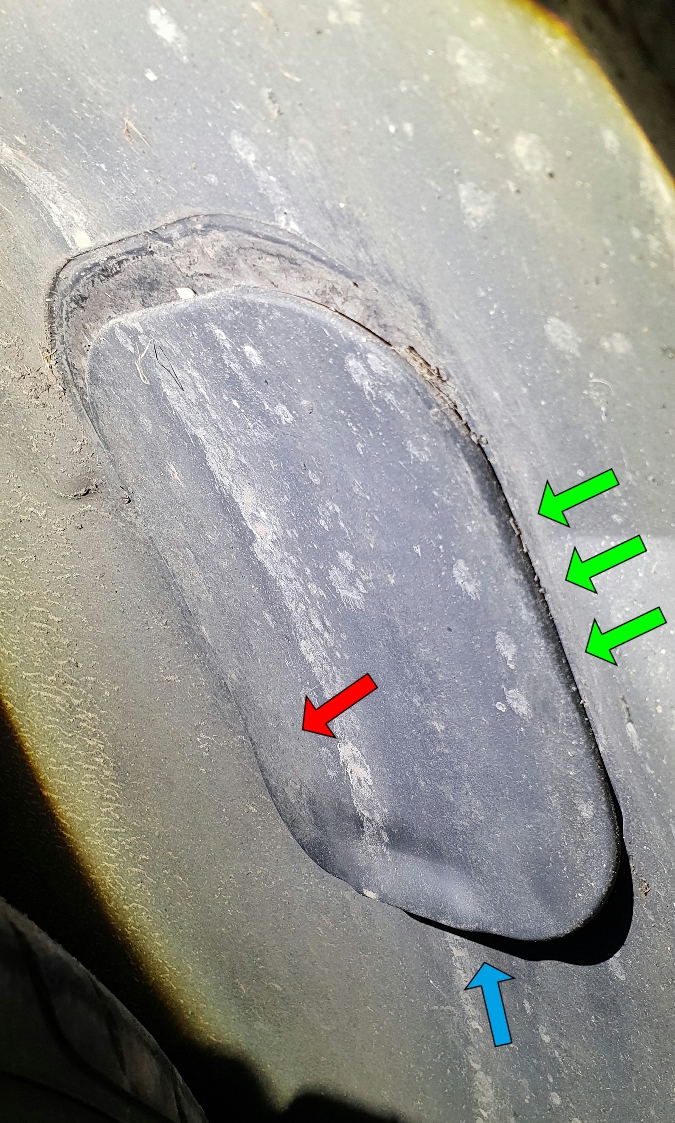 Now off, the dust cap is easy to remove 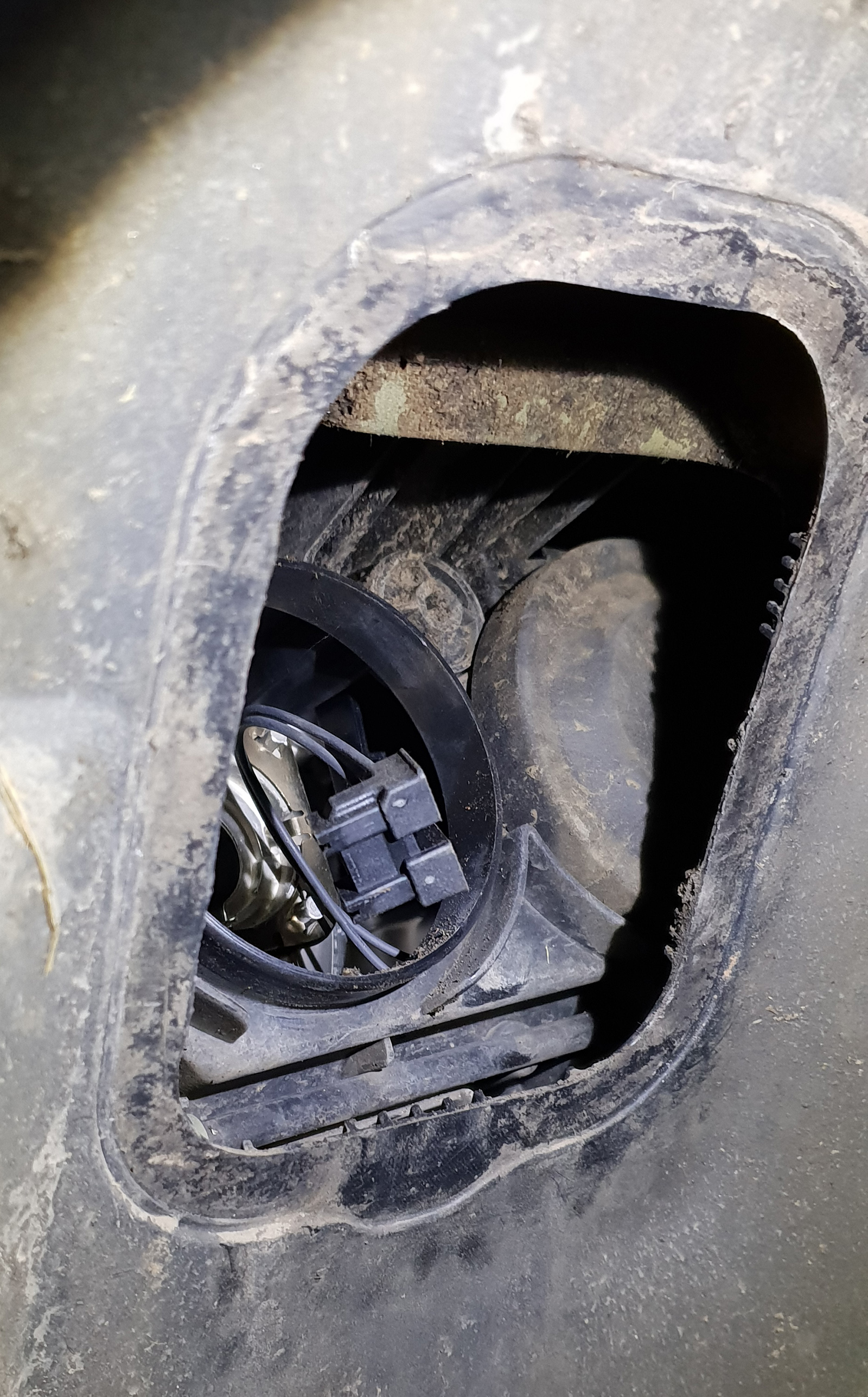 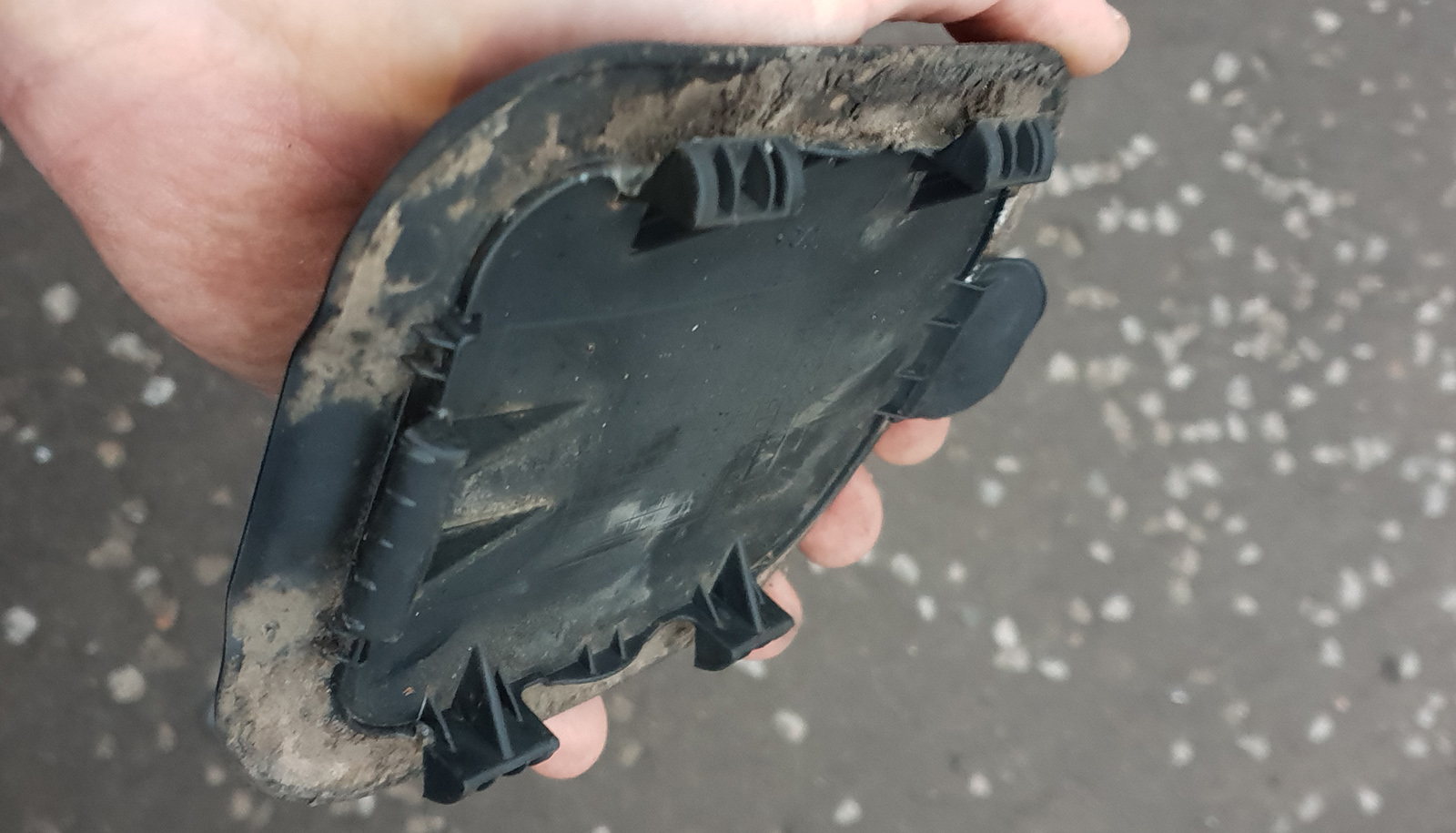 Fits nice inside, wire side down running along the metal piece of the original VW housing. The old bulb just pulls out by the way

With the new bulb installed - which just pushes in - you can see the two spades which are needed to connect to the car's power and pass out back to the ballasts (only to return again). Polarity is important but the manual says installing it the wrong around will not damage components or the bulb. I can verify this for one side but I noticed my power blocks had a dot on one side, marking the negative cable. This was consistent on the other side so no need to guess as the car's power cable are both black. The spades fit tightly and I am confident they won't work their way lose. If they did, its not like it would be difficult to get access and diagnose. I would prefer to see a dedicated socket but they've made this to be as universal as possible

Dust cap back on, time to hook up the ballasts and canbus canceller 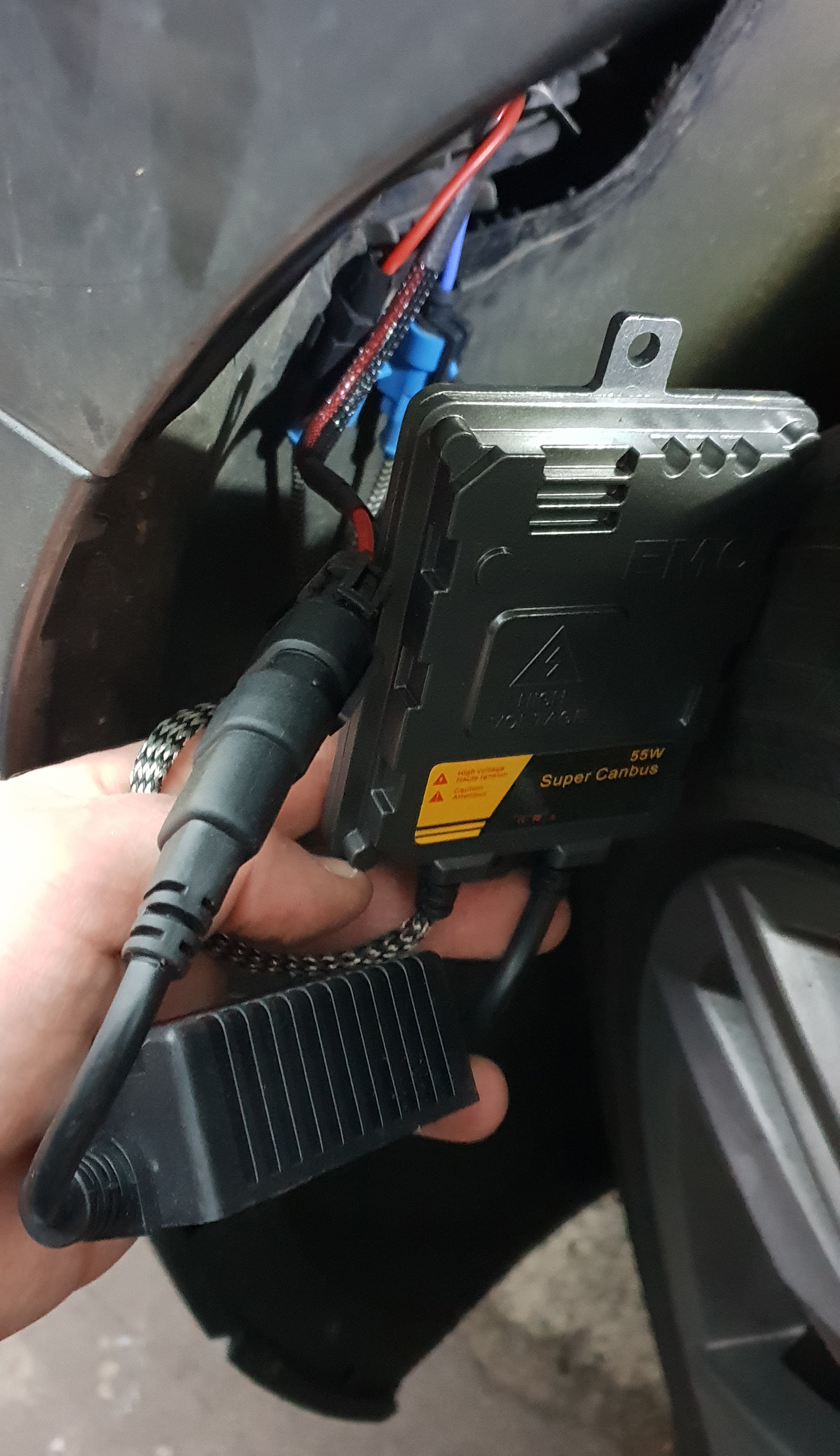 The large ballast fits perfectly up the way, hidden and snug with little movement, whilst the 2 other blocks fit either side. 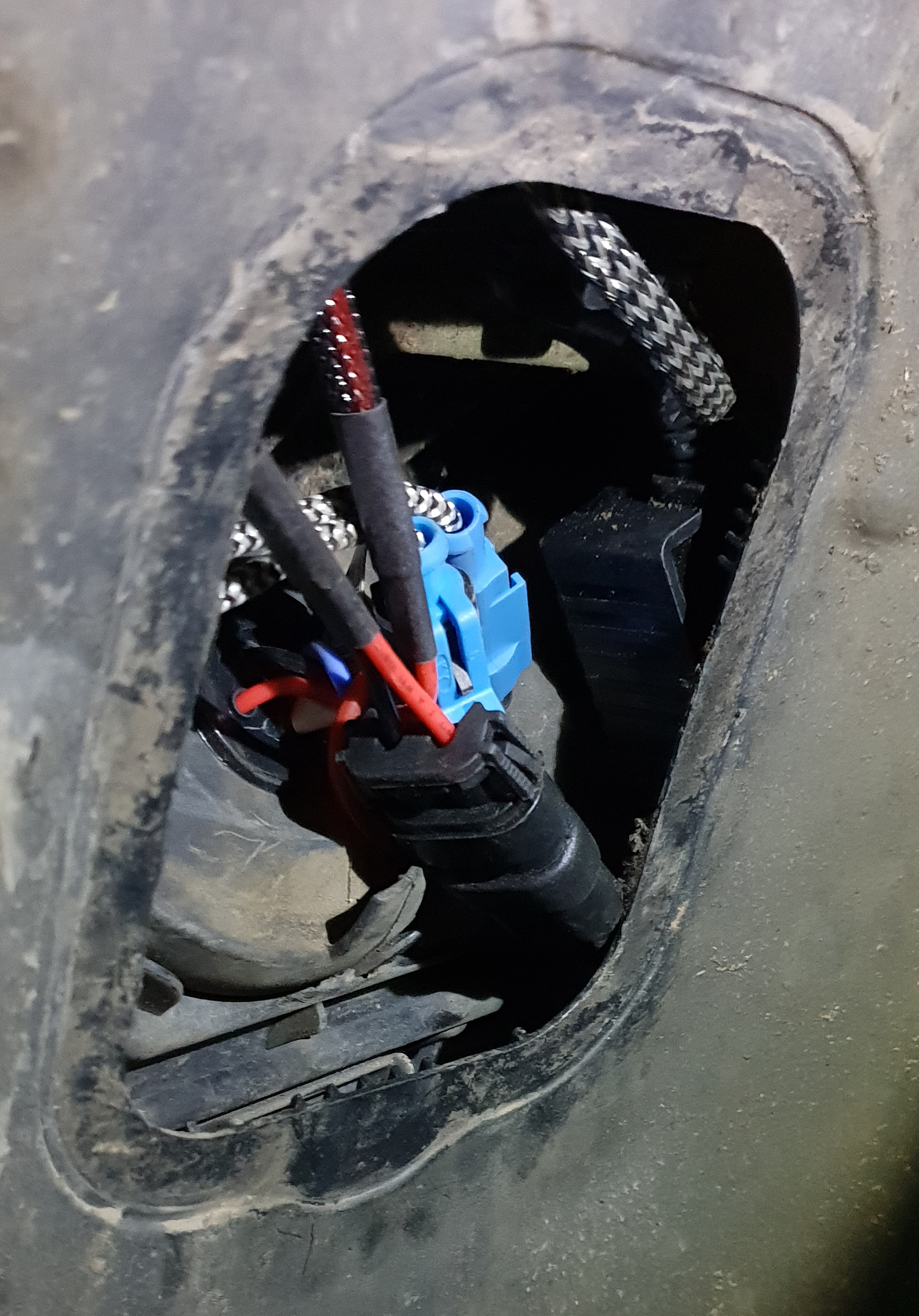 A view from inside the engine bay, back of headlight - you can see one of the blocks. The main ballast is hidden from view as its been pushed up between the two plastic skins. Cable tie as necessary to prevent excessive movement.

One installed, time for the other

Street view with both installed. Difference is night n day!

How a wall looked with original Halogen 10 feet from wall 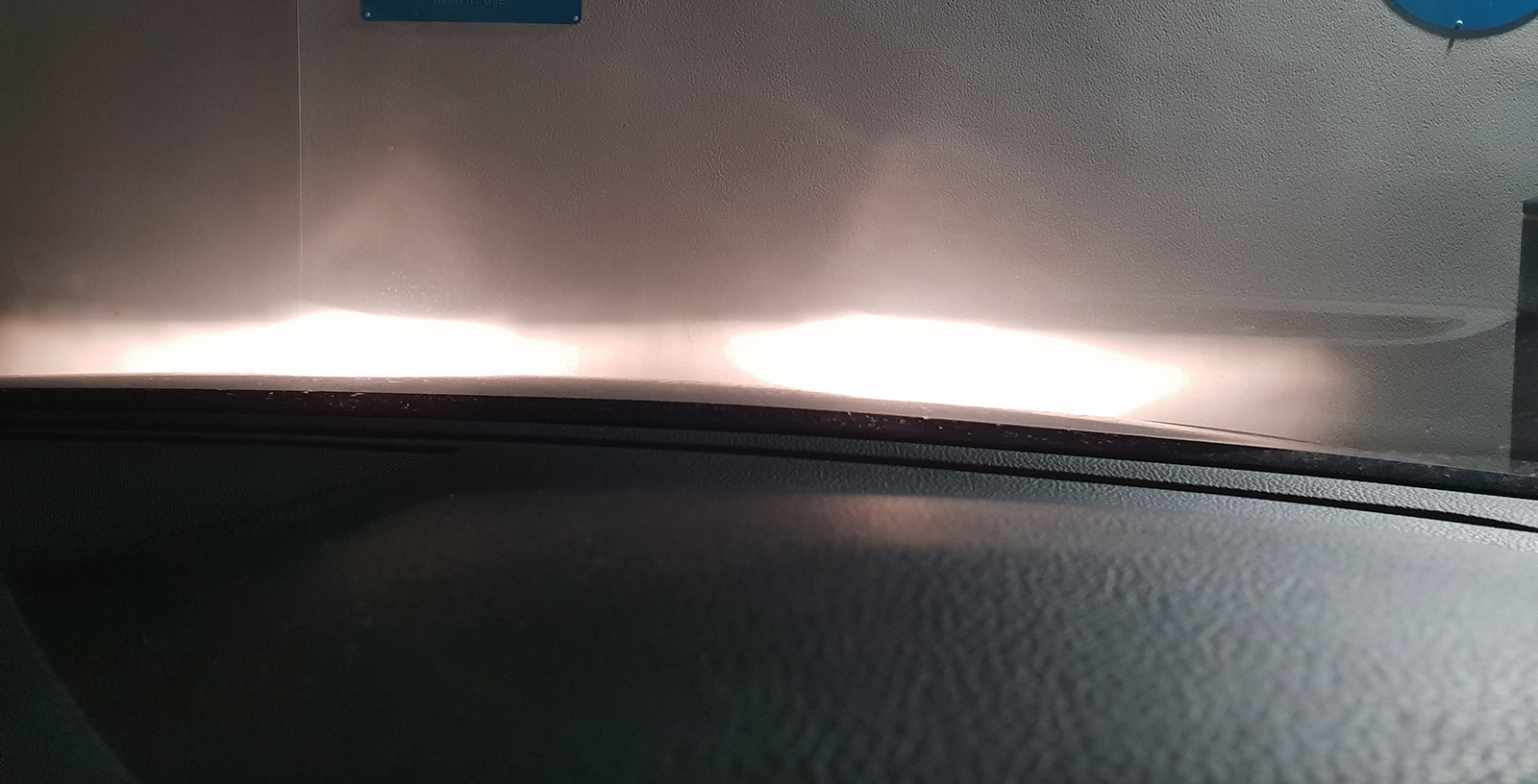 Half n half 10 feet from the same wall. Done for comparison but the brightness of the HID has affected the white balance of my phone's camera, giving inaccurate colours - notice darks are much blaker, wall colour is off etc. Also the phone was not on exact same place on dashboard so its hardly scientific. I did do other photo's but the camera's representation was no way true to the human eye. Always an issue with dark shots and bright lights

Anways the result. Note DRL's and Fog LED's have already been fitted

Fogs and full beam - which are still halogens hence colour

So very happy with the job. Now to decide what to do with the main beam. I will no doubt try a Philips LED but being 35watt equivelant I am skeptical its going to be satisfactory. The other option at the moment is some like Osrams bright white xenon look halogens which sadly only last hours and are known to pop just months after installing.

Be sure when i do something I will post back with my findings. Good or bad.
Never underestimate the predictability of stupidity.

This topic has 11 replies